You are here: Home > Flag of Ukraine 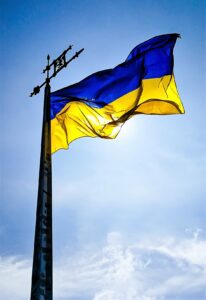 Flag of Ukraine: ‘Original by Leonhard Niederwimmer via Pixabay’

The Blue-and-Yellow and its struggle to fly.

The sky blue and yellow of the flag of Ukraine have become the symbol of international solidarity with the Ukrainian people and of protest against the Russian invasion. Except in Russia and a few satellite states, the Ukrainian flag is flying widely. And its colours light up famous buildings worldwide.

The Flag of Ukraine: symbolism

The blue and the yellow of Ukraine’s flag represent the country’s role as Europe’s breadbasket. Blue denotes the skies over the vast land, while yellow stands for the grain growing in the huge wheatfields beneath.

The Flag of Ukraine: history

In its current attack, Russia aims to erase this flag – and history is hereby repeating itself. From 1772 until 1918, the lands of modern Ukraine were divided between the Russian and Austrian (later Austro-Hungarian) empires. The flag itself dates back to a meeting in Lviv during the revolutions of 1848, which adopted (light) blue and yellow as the colours of the Ukrainian people. These colours became popular throughout all the Ukrainian lands, but only flew as a national flag under the short-lived Ukrainian national republics of 1918/20.

Following its conquest by the Red Army, Ukraine became a Soviet state and had to adopt a red flag. Use of the blue and yellow flag revived briefly from the summer of 1941, under the rule of Nazi Germany. In 1944, however, the Red Army drove out the invaders. The Soviet Union resumed control and Ukraine again had to fly a red flag.

In the spring of 1989, the blue and yellow flag reappeared in Lviv and western Ukraine, used mostly by nationalist and human-rights organisations. In 1992 it was declared the national flag of the newly independent Ukraine.

The blue and yellow flag became a symbol of freedom and democracy, and Ukrainians display and wear their national colours with visible pride.

For more about Ukraine and its flags: https://www.fotw.info/flags/ua.html