You are here: Home > New Zealand Flag referendum: final round

The final round of the New Zealand Flag Referendum has begun, which will decide once and for all whether New Zealanders will keep their current flag or change it. 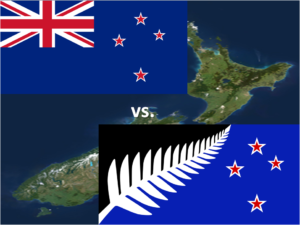 The challenger, Kyle Lockwood’s Silver Fern (Black, White and Blue), must defeat the existing national flag in a simple head-to-head ballot, which began on 3rd March and closes on 24th March, to become the new flag.

Lockwood’s Silver Fern (B.W.B.) narrowly won the referendum’s first round late last year. It triumphed over his other design (Silver Fern (Red, White and Blue)) by 15,324 votes in the fourth and final iteration after votes for the three other candidates had been distributed following their elimination.

A full breakdown of the first round can be viewed here.