By ChiefVexillologist on 9 September 2022 in Flag Facts, News

The Flag Institute is deeply saddened by the news of the passing of HM Queen Elizabeth II at Balmoral Castle on the 8th September, 2022.

Her Majesty’s over 70 years of service as our Queen has been inspirational and her steadfast hand at the helm of this country, and her other realms, will be much missed. Truly the age of HM Queen Elizabeth II has passed and the world is the poorer for it.

Our deepest sympathies are with HM King Charles III and the members of the Royal Family.

GOD SAVE THE KING!

Below we give some basic information on when and how to fly flags at half-mast:

When a British national flag is at half-mast, other flags on the same stand of poles should also be at half-mast or should not be flown at all. The Union flag, British ensigns, constituent-national flags (eg. England, Scotland, Wales), county flags, other community flags, house flags and banners of arms can all be flown at half-mast. Flags of foreign nations, or non-British organisations, should not be flown, unless their country is also observing mourning or has given special permission to fly their flag at half-mast. 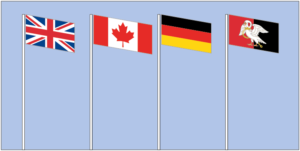 A stand of four flags: UK, Canada, Germany and Buckinghamshire 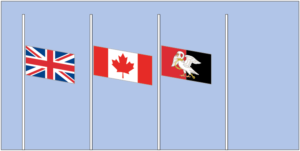 Flags should be flown at half-mast from the 8th September until 8am on the day after the funeral (expected to be Monday, 19th September) except on Proclamation Day (10th September in England and 11th September in Scotland, Wales and Northern Ireland) when flags are flown at full-mast following the proclamation at 11am. Note that flags with mourning cravats do not need to have them removed.

An alternative mark of mourning, used when half-masting is unsuitable, is to add a black cravat or ribbon to the top of the flag, at the hoist. This is a simple bow of fabric with long tails, similar to the tying of a shoelace. On flags flying outside it is suggested to add a cravat on both the obverse and reverse of the flag so it can be clearly seen from any direction. The cravat can be made of any available black fabric. 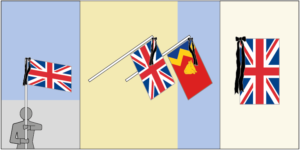 Flags using mourning cravats: an indoor flag on a stand, two flags on angled poles and a flag displayed against a wall