You are here: Home > In memoriam: Whitney Smith

By ChiefVexillologist on 22 November 2016 in FI News 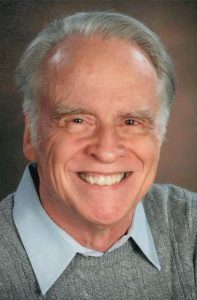 Whitney Smith Jr. of Winchester, Massachusetts, the preeminent scholar on all aspects of the history, symbolism, and significance of flags, died on 17 November 2016.

Smith was born in Arlington, Massachusetts, on 26 February 1940. He became interested in flags at the age of five and received constant encouragement from his parents, Whitney Sr. and Mildred G. Smith. He began by collecting newspaper articles and flag-related publications as well as actual flags. At the age of 11 he started his formal research work by writing to the Greenland government to find out why such a large island was (according to the flag books) without a flag of its own. Today his collection, comprising a quarter-million documents and tens of thousands of books, pamphlets, engravings, electronic files, and flag-related artefacts, is the largest in the world.

At 14, Smith and his closest friends formed an association — Quinque Quæsitores (“the five seekers”) — “For the purpose of forming individual opinions, for gaining the fellowship of students with mutual interests, for broadening our interest in all educational fields, for keeping in conversational contact with current news, for working together towards solving our problems, and for gaining experience in communal living and organizational management.” The organization profoundly influenced all its members, who have maintained continued contact since 1955.

As an adult Smith created many of the institutions that allowed for the growth of a worldwide community of flag scholars. At the age of 17 he conceived the term now universally used for the scholarly study of flags. “Vexillology” was formed by combining the Latin word for flag (vexillum) and the Greek ending indicating “the study of.” At 21, Smith and colleague Gerhard Grahl began in 1961 to publish The Flag Bulletin, the world’s first periodical on flags. Later Smith authored 27 books on various aspects of the subject.

In 1965, Smith and a Dutch colleague convened the First International Congress of Vexillology in Muiderberg, The Netherlands. From that meeting Smith then helped found FIAV in 1969, the Fédération internationale des associations vexillologiques (International Federation of Vexillological Associations), which continues to sponsor biennial international congresses and to facilitate relations among vexillologists around the world. From 1969 until 1991, he served as FIAV Secretary-General. The North American Vexillological Association, encompassing flag scholars of the United States and Canada, was created in 1967 by Smith, who served as its president through 1977. He was also responsible for founding the Flag Heritage Foundation in 1971 and assisted in the initiation of flag study societies in several other countries.

His promotion of vexillology included interviews for radio, television, and many newspapers and magazines. The latter included The Boston Globe, The Christian Science Monitor, The New York Times, The New Yorker, People, Smithsonian Magazine, Time, The Times (London), USA Today, and his local newspapers The Lexington Minuteman and The Winchester Star.

Smith delivered numerous lectures, wrote several hundred articles for publication, and did appraisals of historic flags. Research assignments took him to nearly every American state and to over 50 countries. In the course of his professional work Smith developed standard vocabulary and design definition norms for flags now used worldwide, including “vexillography” (flag designing) and “civil ensign” (the flag flown by privately-owned vessels).

Smith’s 1975 book Flags Through the Ages and Across the World is considered the best general work on flags ever published. Some of the other books he authored include The Bibliography of Flags of Foreign Nations (1965), The Flag Book of the United States (1970), Flags and Arms Across the World (1980), Current National Flags (1987), Flag Lore of All Nations (2001), World Book’s Encyclopedia of Flags (2005), and The American Flag: Two Centuries of Concord and Conflict (with Howard M. Madaus, 2006). Over 300,000 copies of his works have been sold. Articles by Smith appeared in various encyclopedias including the Encyclopedia of Nationalism (2000).

Smith also designed a number of flags including — at the age of 20 — the national flag of Guyana. He was named a Laureate and Fellow of FIAV, a Whitney Smith Fellow of the North American Vexillological Association, and a Fellow of The Flag Institute (United Kingdom). Among the many other awards he received, the National Independent Flag Dealers Association presented him with the George Washington Award for Excellence. In 2013, Smith achieved a lifetime goal of placing his collection at an internationally recognized academic research institution. The Whitney Smith Flag Research Center Collection is now part of The Dolph Briscoe Center for American History at The University of Texas at Austin. Unique in its size and scope, the collection is available to scholars for the continuing advancement of the study of flags. After the collection’s move, Smith continued as executive director of The Flag Research Center until his death.

Before the influence of his work became felt, flags were generally considered by the academic world and others as simply a colourful hobby — “The floral border to the garden of history,” as one writer put it. When asked why they should be taken more seriously, Smith’s standard reply was “People kill for flags. People die for flags. It is incumbent on us to try to understand how a piece of cloth can incarnate that power.” Smith is survived by his sons Adrian and Austin of Seattle, grandson Aaron Blu of Vancouver (Washington), and sisters Sybil Smith and Lynne Hartwell of Billerica and Gloucester (Massachusetts). Services will be private. The family requests that any memorial donations be made to either the Briscoe Center for American History (Whitney Smith FRC Collection) or the American Civil Liberties Union.

Reproduced with the kind permission of The Flag research Center from The Flag Bulletin #234.

5 Responses to In memoriam: Whitney Smith