You are here: Home > Flag of the Vatican City

As I’m sure we’re all aware, the Vatican City is the world’s smallest country in both size and population. Perhaps this is why its flag is one of the most instantly recognisable in the world.

Despite the papacy dating back to 33AD, it was not until the signing of the 1929 Lateran Treaty by Pope Pius XI and then-fascist Italy did the Vatican become a sovereign state. On the same date of the treaty’s ratification, 7th June 1929, the city-state’s flag was officially adopted.

The flag’s two bands are yellow and white thanks to Pope Pius VII. The Vatican’s Noble Guard originally wore a yellow and red cockade (a knot of ribbons) on their hats, but Napoleon’s forces wore the same colours and were incorporating these guards into the French army. Pius VII ordered those who remained loyal to change their red ribbon for a white one in 1808.

Seventeen years later the Papal States’ merchant flag (the papal coat of arms on a white background) added a yellow band on the hoist side. This became the Papal States’ flag and was used continuously until 1870, save for just under six months in 1849 when Pius IX was exiled and a short-lived Roman Republic was declared – it used an Italian tricolour with “Dio e Popolo” (“God and the People”) written in the white band.

After the signing of the Lateran Treaty papal authorities selected the 1825 merchant flag as the new state’s flag but with the 1862 Papal Infantry Flag’s square proportions. This flag was yellow and white like the Vatican flag but without the coat of arms. 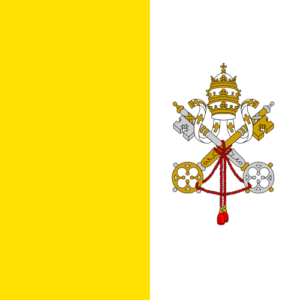 This flag is almost identical to that of the Papal States prior to 1870 when Italy captured Rome.

The Vatican coat of arms lies within the white band of the flag. It depicts the papal tiara above crossed gold and silver keys (the Keys to Heaven given by Jesus to St. Peter). The gold key represents spiritual power and the silver worldly power. The silver key always points towards the yellow band of the flag, unlike the Holy See’s coat of arms of which the reverse is true. A red cord connects the two keys, which according to vatican.va: “alludes to the bond between the two powers.”

Upon the death of a pope the flag is flown at half-mast until the completion of novemdiales, the ninth day of mourning that follows his death.

Bonus Fact: The Vatican’s flag is one of only two square national flags (1:1 ratio). The other is Switzerland.

4 Responses to Flag of the Vatican City