You are here: Home > County flags star in Commons debate 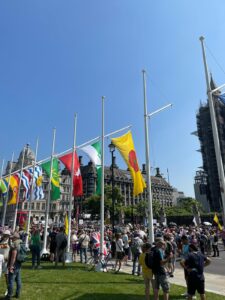 The county flags of England, Scotland and Wales starred in the House of Commons on Thursday 22 July.

To date 52 historic counties have entered a flag in the UK Flag Registry.

And to celebrate Historic County Flags Day on 23 July, the flags flew together in Parliament Square, London.

Among them were newcomers Herefordshire and Leicestershire – the last of the 39 historic English counties to register a flag.

Tom is a past editor of Flagmaster and a vice chair of the All-Party Flags and Heraldry Group.

Read his speech in full below:

‘On a lighter note, I hope that before the House adjourns today we can celebrate the colourful display that we can currently see in Parliament Square. Tomorrow is Historic County Flags Day. It has been celebrated for some days now, with the flags of the historic counties of England, Scotland and Wales in Parliament Square. The flags on display span the nation and also time. We can see old flags such as the St Piran’s Cross of Cornwall and the Warenne Checks of Surrey, which dates from the 13th century, as well as some more modern designs.

Many of those modern designs are thanks to the work of charities such as the Association of British Counties and the Flag Institute. I declare an interest as a former editor of the Flag Institute’s magazine. People at that charity, such as Graham Bartram and Philip Tibbetts, have worked tirelessly to encourage community groups and individuals to design flags, with Philip Tibbetts in particular criss-crossing the country. I congratulate him on his recent appointment as honorary vexillologist to the Court of the Lord Lyon.

Although we are forever one United Kingdom, as we leave this place I hope that we can admire the diversity of our country, return to our constituencies and see all the best that there is in our counties—and I believe that the best of our counties are embodied in our county flags.’