Kyle Lockwood’s Black, White and Blue design seems to have won the first round of the New Zealand Flag Referendum.

With late and overseas votes still to be counted, it appears this design has beaten Lockwood’s other entrant (a Red, White and Blue variation) into second place. 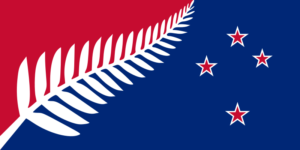 Voter turnout was 48-per-cent, a reflection on how this issue has divided opinion in New Zealand.

The winning flag, to be officially announced next Tuesday, will face the current New Zealand flag in the second round of the referendum next March.