Christmas Island was discovered on Christmas Day 1643 by Captain William Mynors. Today it makes up part of Australia’s External Territories. 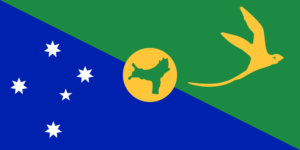 Christmas Island’s flag is 30 next April.

Given its Australian connection, the island’s flag was officially adopted on Australia Day (26th January) 2002, though the same design had been used unofficially since 14th April 1986. This was the date the Christmas Island Assembly announced the winner of its flag design competition. Out of 69 submissions the winner was Sydney resident Tony Couch’s. He had previously worked on the island and won A$100 for his effort.

Couch’s design features a blue and green background, split diagonally from top left to bottom right respectively to represent the sea and land. Like many Southern Hemisphere flags, the Southern Cross also appears. To further tie Christmas Island with Australia the constellation is used in the same manner as it is on Australia’s flag.

The bird that is shown in the top right of the flag is the Golden Bosun (Phaethon lepturus fulvus), one of six races of White-tailed tropicbird and the only one native to the island.

Finally, the island itself is shown in green on a gold disc background in the flag’s center. The gold disc was added to offset the green, but has since (perhaps fittingly) symbolised the island’s mining industry, as Tony Couch’s job on Christmas Island was as a phosphate mining rigging supervisor.

Bonus Fact: the first attempt to make this the official flag of Christmas Island failed in 1995.