You are here: Home > The West Indies Federation Flag

Its flag was designed by Edna Manley (1900-1987) who is considered to be the ‘mother of Jamaican art’. Her design was a blue background with four undulating horizontal white stripes to represent the Caribbean Sea, the upper two stripes reflecting the lower two. In its center sat an orange-gold disk – the Sun. Its ratio was 1:2. 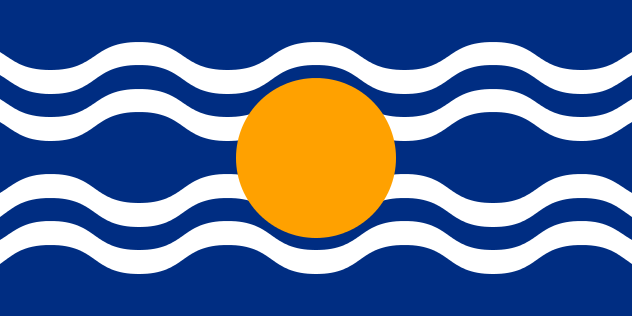 There was no ‘official blue’ designated to the flag, meaning copies with light blue backgrounds were also produced.

The flag of the West Indies cricket team (left) prior to their 2015 Cricket World Cup match against Zimbabwe.

The Federation competed at the 1960 Summer Olympics in Rome as Antilles and won two bronze medals in athletics. Their slightly modified flag had its white stripes spanning a greater area and the disk was a red-bronze colour. The West Indies Cricket Board’s crest (with white and green horizontal stripes) makes up the flag of its cricket teams, but the old Federation flag was flown during the 1999 Test match against Australia in Barbados.

Edna Manley was the wife of Norman Manley, who founded the (currently in power) Jamaican People’s National Party and was the nation’s Chief Minister/Premier from 1955-1962. Their son Michael served as Jamaican Prime Minister from 1972-1980 and 1989-1992.

Easter Island’s Flag
The many Crosses of St. George