You are here: Home > Flag of Latvia: From the blood of heroes

It was 25 years ago this Friday (27th February) that Latvia re-adopted their current flag, the same one they’d used from the day the country declared its independence from Russia: 18th November 1918.

But the story behind Latvia’s flag dates back over 700 years. 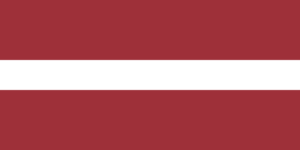 Legend has it the leader of a Latvian tribe was killed and his body wrapped in a white sheet. The part he was lying in remained white as his blood stained the rest of the sheet red. During the tribe’s next battle they fought under this very sheet and won.

There is a similar story surrounding the origins of Austria’s flag too.

The Livonian Rhymed Chronicle mentions a battle that took place in 1279 or 1280. In the battle Latgalian soldiers from Cēsis (a town just under 50 miles north-east of Riga) fought under a red flag with a white stripe.

Latvia’s horizontally striped carmine red-white-carmine red flag (Ansis Cīrulis’ adaptation) was officially adopted in 1922, four years after declaring independence and remained the nation’s flag until its annexation by the Soviet Union in 1940.

During Soviet occupation of the area the Latvian S.S.R. used two flags. The first, used from 1940-1953, was what we know as the flag of the U.S.S.R. with the letters “L.P.S.R.” written in gold above the hammer and sickle. The second (1953-1990) replaced the letters with a hollow gold five-pointed star and featured rippling water in blue and white at the base. It is now illegal to display this flag, along with anything showing the hammer and sickle, in public in Latvia.

Bonus Facts: Carmine red is a deep red that is ‘very slightly’ purplish but is still closer to red than crimson. It is sometimes used to symbolise the readiness of Latvians to give their blood to defend their nation.

Flag of the Week – The Gambia
Flag of Wales: A blood-red dragon on a field of green