By ChiefVexillologist on 28 February 2016 in UK Flag Registry News

County Flags have become an important part of our regional and national identity. Most English counties now have a recognised County Flag, but Staffordshire is yet to obtain one. The Flag Institute maintains the Register of County Flags and works with county organisations to come up with suitable designs. The County Flags are based on the historic counties of the UK, rather than the modern administrative areas, so Staffordshire includes Stoke-on-Trent, Wolverhampton, and several other parishes that fall outside Staffordshire County Council’s area.

The two designs are shown below: 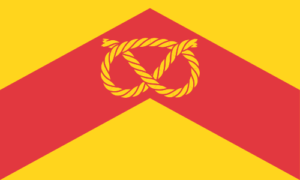 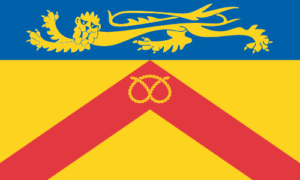 The gold background and red chevron, common to both designs, comes from the coat-of-arms of the de Stafford family and has been used in connection with the county since at least the 17th century.

The vote will take place from 9am on Monday 29th February and closes at 9am on Sunday 27th March 2016. The result will be announced the next day. To vote, just go to the Flag Institute’s website and follow the link from the front page. Voters are asked to confirm that they live or work in the historic county of Staffordshire.

Graham Bartram, Chief Vexillologist of the Flag Institute said, “This is the first time that the Flag Institute has had two applications for the same county and I think it is a reflection of how important County Flags are becoming to people, so we feel it is only fair to let the people of Staffordshire have their say on which flag will represent them. I hope as many people as possible will vote for their preferred design.”

The vote has now closed.